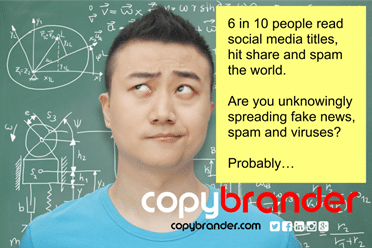 Only you know the answer to this. The rest of the world’s online behavior as a group, however, is something that can be analyzed.

According to a 2016 study of social media sharing by computer scientists at Columbia University and the French National Institute, 6 in 10 people share social media posts without reading. These statistics are from data on 2.8 million shares.

The simple fact that you clicked on a link to read this puts you in a small crowd.

Which begs the obvious question; do people understand what they’re sharing? For most, the answer is no.

Unscrupulous marketers are getting very clever. They know most people are not reading past the title of posts shared on social media. And they are taking advantage of this. It’s not unusual to see spam advertising in the body of posts that have nothing to do with the title and description.

Not convinced yet? Here are a few real-life examples for you to consider. 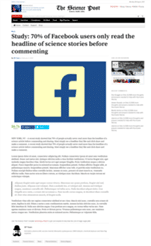 To prove this theory, The Science Post, a satirical science news site, conducted its own study. Yes, it is a satire site, but the people who run it are Ph.D.’s and professors. There is some validity to the point they are making, which is that people simply don’t read posts before sharing.

The headline of their fake news post was straight forward, ‘Study: 70% of Facebook Users Only Read the Headline of Science Stories Before Commenting.’ The readers that clicked on the link found a post filled with ‘lorem ipsum’ gibberish. The entire post was nothing.

The scary part? The post is still there and still getting shares. Since February 2017, this fake post has

In fact, people are sharing it so much that the article is ranking on Google. Search “percentage share content without reading, ” and their fake news post will appear at #5 on the first page.

The people at The Science Post made their point.

Here’s another notable example. IFLScience.com wanted to experiment on their own to test this theory. So, they created a completely fake article to see how many shares it could get with nothing but an outrageous headline.

They published Marijuana Contains “Alien DNA” From Outside of Our Solar System, NASA Confirms. In the article, they wrote, “We here at IFLS noticed long ago that many of our followers will happily like, share, and offer an opinion on an article – all without ever reading it.”

Did You Actually Read This?

Consider this. How many times do you look at comments on a popular or controversial post or article and see somebody ask, ‘did you actually read this?’

It’s an important question because many of the people sharing and not reading are also commenting on these posts. Their comments are based on self-perceived ‘expertise’ instead of the actual contents of the post.

So that guy arguing with you about something you share? He might be right if you didn’t bother to read it first.

Manipulate the Headline to Increase Shares

Here is the more significant issue, at least as far as I see it. This practice isn’t only limited to spam advertisers. Let’s say your goal is to convince somebody to share your post with a certain target audience. If you manipulate the headline to increase shares, then you can fill the post with whatever content you want.

Imagine the embarrassment of sharing a political post that supports a highly controversial view opposite of your own. People will only believe the ‘my account got hacked’ lie a few times before they begin to wonder.

Just because you agree with the title of a social media post, doesn’t mean the content is the same. People need to stop being lazy and click to read before sharing.

A buddy of mine recently told me a story about how his wife had shared an ‘interesting’ post without reading it first.

I asked what he meant by ‘interesting.’

I asked why nobody noticed and he said, ‘the post subject was ‘modern family planning techniques,’ and several of her friends had fertility issues. So, they thought they were passing on helpful info.’

The Only Way to Fix This Problem

The only way to fix this problem is to stop it at the source. So how do we do that?

As a final note, the folks over at IFLA.org (The International Federation of Library Associations and Institutions) put together this handy infographic to help spot fake news. 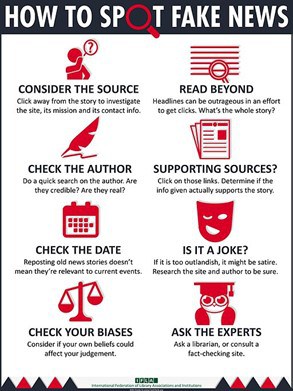